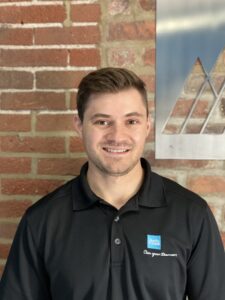 Nick graduated from The University of Akron in 2017 and will be attending Case Western Reserve University for a master’s in business administration in the fall of 2021. He found ScaleCo through Case Western Reserves Career Office and applied for the position. Prior to ScaleCo, Nick worked at Charles Schwab as a supervisor where he gained industry knowledge in the personal finance space. During his time at ScaleCo, Nick was responsible for researching venture capital opportunities regarding the Volker Rule and worked on the teaser for a ScaleCo Fund. This exposure opened his eyes to the world of entrepreneurship, and the possibilities that exist within business. “Entrepreneurship through acquisition is not something that I knew was possible…There are so many career paths out there…And it’s kind of cool to know that entrepreneurship is a viable path as well.” Always with a can-do attitude, Nick successfully completed multiple projects during his internship.

Nick appreciated the opportunity to work with ScaleCo’s Founder, Brendan Anderson, on valuable assignments that pushed the company forward. “…working on meaningful projects, having the opportunity from Brendan …it’s kind of cool as an intern be able to have that discretion.” He feels that his experience has taught him more about business and finance than what he was previously familiar with. “I feel like now I can walk into walk into an investment bank and what I was talking about, right off the bat. So, I really enjoyed the chance to expand my skills.” Nick’s greatest professional passions are finance and investing.

In ten years,’ time, Nick is interested in facilitating and closing deals in the broker, private equity, venture capital or strategic space. “I know I want to be working on deals. Whether that is involved in a financial process like investment banking, private equity, venture capital, or if it’s working on strategic acquisitions at a bigger company…I want to be involved in the decision-making process in getting deals done.” Outside of work, Nick is passionate about fitness and golf. Continuously open to new challenges, Nick successfully completed multiple projects during his time at ScaleCo. We wish him luck as he begins his graduate education!